LNG growth remained strong in the US in 2021 and is set to exceed Australia and Qatar in 2022, as the US LNG export capacity increases.

After the shale gas revolution, natural gas production increased dramatically, supplying North America with abundant and low-cost gas. Natural gas supply has vastly outpaced demand in the past five years, which in turn has driven down the US natural gas prices far lower than European and Asian markets.

Soaring natural gas prices in Europe and Asia have incentivised producers to export, and consequently, exports have grown exponentially.

According to the US Energy Information Administration (EIA), from close to zero exports in 2015 the US became the third-largest LNG exporter globally in 2019, with Australia and Qatar ahead.

Year-on-year (YoY) export growth in 2019 and 2020 was 68% and 31%, respectively, and considering a sharp fall in exports in 2020, growth remained strong reaching full capacity in early 2021. According to the EIA, US export capacity is expected to exceed the current largest LNG exporter Qatar in 2022 and will likely remain in this position until 2025.

The Sabine Pass Train 6 Development, due to be complete in early 2022, has already made its first shipment and is to add a further 0.7 billion cubic feet per day (Bcfd). In addition, the completion of the second Calcasieu Pass plant will add a further 1.5Bcfd to export capacity next year. The EIA estimates an increase in nominal capacity from 9.5Bcfd at the end of 2021 to 11.4Bcfd by the end of 2022. 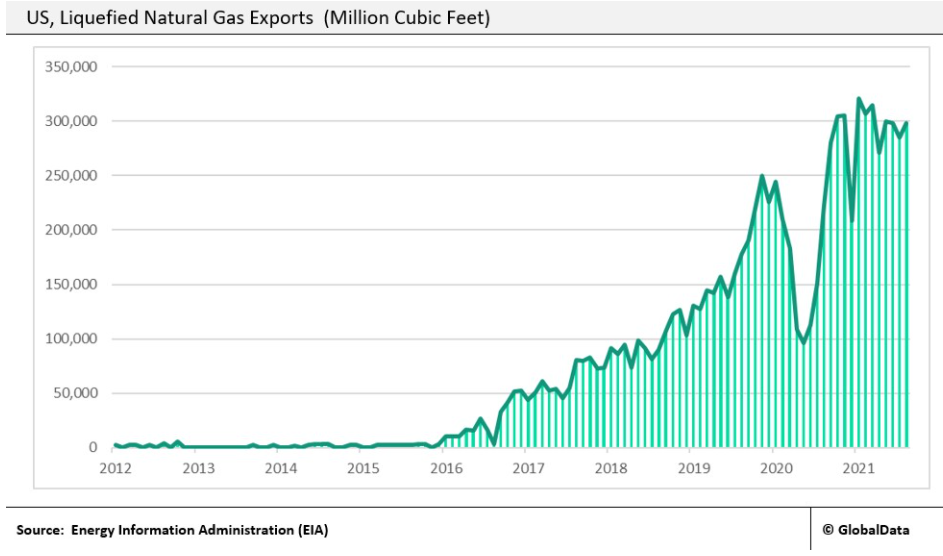 Domestic demand for natural gas is slowing as the transition into a low-carbon economy is well underway. New energy standards, increased federal investment in renewable sources and the implementation of carbon neutrality targets are putting downward pressure on the industry.

President Biden expects the US economy to be fully carbon-neutral by 2050 and California has set a target of 60% renewable electricity supply by 2030. However, gas is seen as a ‘cleaner’ energy source and is used as a transitional fuel.

As the rest of the world moves away from coal-fired power stations, demand for natural gas will remain substantial, especially in the Asia-Pacific region.

The construction of LNG plants is accelerating, large scale projects such as the $15bn Corpus Christi Liquefaction Export Terminal and the $10bn Golden Pass LNG Liquefaction Facility currently in the execution stage will aid construction growth in the US over the next five years.